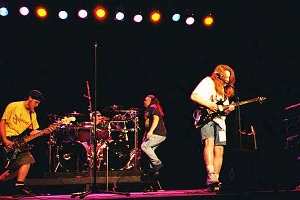 It’s been almost a year since 3/4 of Stones Crye started meeting weekly.  Where are they now?

At first we only met socially, to share a meal, some study and prayer, a lot of talking and getting reacquainted.  Within about 3 months we decided in spite of it not making much sense, we’d put the band back together and pick up where we left off.  Or at least as close to it as possible.

Hans was not going to be available on bass so that immediately mandated a search for a new member.  We’ve approached this as in finding the very last member that would ever join the band.  In other words, no more member changes.  So who ever we found would need to fit a pretty ridiculous set of criteria and we all knew up front this was going to take a while, which it has.  We’ve interviewed numerous players and had one lined up until he suddenly moved to Arizona.  We chalk that up to he simply wasn’t the right guy for the job.  While the search continues we recently interviewed someone who looks so promising and perfect it’s almost frightening.  If you’re willing to be patient and wait, God rewards that in a supreme way.  More on this at a later date.

Meanwhile, in spite of no bass, we rehearse, relearn and freshen up the old songs.  Not all of the old songs made the cut either.  Of course outside of worship team situations none of us had played much, and especially not the type of music that is Stones Crye.  So part of this process has been to get our chops back as well, which has been happening.  To date, many of the old songs are back in shape and almost ready for prime time.  We also 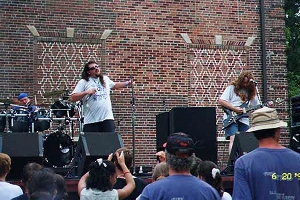 have found that vocally we seem to be stronger than ever and we’ve added some additional vocal parts to take advantage of this.  Things are sounding and feeling good and natural.  The greatest blessing of this has been reuniting with old and dear friends, including SC soundman extraordinaire, Doug Webster, who has been graciously sitting in on bass for some rehearsals, which we are very grateful for.

But this isn’t the end of the story.  A funny thing happened on the way to the forum.  Through the course of all this relearning-getting-chops-up we’ve started writing again as well.  In some instances they are older ideas that never made it in to a finished song, now complete.  Others are brand new compositions.  And best of all, they sound really good and we’re very excited about them.  Of course after 10 years you would expect new material to be a little different, which it is.  Yet not a radical departure.  They still sound like SC and fit very well with our back catalogue.  The new songs reflect a maturity in writing and arranging.

The past 10 years have wrought many trials and struggles for each of the three of us which will also be reflected in the reformed band.  As a result our ministry focus seems to have shifted from where we were then, to one of reaching out to the broken, especially to those who have been wounded.  This too has been coming into focus as we’ve worked at preparing for a return.

Lastly, some old acquaintances have made it known there are some gig possibilities waiting for us when we’re ready.

So yes, it’s been quiet on the front, but a lot has been happening.  Lord willing, 2009 may see the official return of Stones Crye.  Stay tuned.