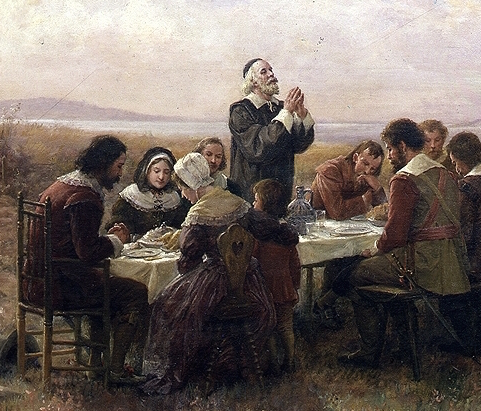 Giving thanks.  We say it, especially in this U.S. nationally recognized holiday of doing so.  But what does it mean?  Really mean?

I’ve been pondering this often this week.

Thanksgiving dates back to the formation of the U.S.  Of course all of the popular images of pilgrims and indians and turkey and a bountiful harvest surround the national holiday.  To the point that we really no longer pay much attention to what these images point back to.  In reality those first years in settling on the shores of this continent where filled with disease, death, crops that failed, near starvation, and fear of the natives who were with good reason afraid of the settlers.  They weren’t good times.  In reading accounts I find it rather difficult to believe these hardy few didn’t give up and go back home to England.  Why didn’t they?  As the story goes, they were seeking to establish a community that was free to worship GOD in a manner which each person believed, rather than what was being forced upon them by the church of England.

The sentiment of a national day of thanks began with their quest and resonated through the years until today where it’s so tightly woven into the fabric of life in the U.S. that we barely give it a thought beyond the prayer that may precede the gorging that is also woven into this same fabric.

George Washington issued the first Presidential proclamation for a day of thanks giving.  John Adams followed suit as did a few Presidents until Abraham Lincoln set the standard for a day of thanks giving to be celebrated by all of the states in November.  Every year since each President issues a proclamation for Thanksgiving Day as it’s come to be known.  While the emphasis has shifted gradually over the years, this day of thanks has it’s genesis in giving thanks to GOD for the bounty of harvest and blessings of the previous year.

Sadly the moral and spiritual decline of this country has eroded the meaning and purpose of the day.  Yet, in spite of the vagaries of recent proclamations, there somehow remains the reason for, and to Whom, we should give thanks.  This year, more than any in the past, is a good time to reflect on this if for no other reason than the nation today is so far removed from it’s founding principles.

Like it or not, believe or not, Thanksgiving Day is a day set aside specifically for the purpose of thanking GOD The Creator for what we’ve been so richly blessed with.  If the day is not for that purpose then I challenge you to tell me what the purpose is.  Who are we thanking after all?  Zeus?  Obama?  Congress?  Walmart?  No!  This day remains as one of the last standing bastions of faith this country still acknowledges.  As long as the day exists, dare we believe there’s still hope all is not lost of our founding principles?  At least as recent as the proclamation for 2014, GOD is STILL mentioned in this official U.S. government document.  Perhaps that is reason to hope.

Officially ordained or not, as for me and my house, we are thanking GOD on this day.  This day and every day.  I believe it’s truly not possible to be thankful enough.  For good health and healing miracles.  For family and friends.  For riches unlike much of the world enjoys.  For being born in a country that still offers some freedoms.  For Jesus, The Christ.  It’s not possible to be too thankful or thankful enough.

Who are you thanking today?